Sophia: What work do you do for social change?

Maggie: A significant area of focus with regard to social justice in my life, right now, and for the last 10 years, is in the area of immigrant justice. Within AFSC, I help to run an immigrant detainee visitation program at the Strafford County jail, which is the only detention center with an Immigration and Customs Enforcement (ICE) contract in northern New England.

We’re using our access to that facility to connect with immigrants facing deportation to help alleviate their suffering and isolation. Our volunteers provide emotional and spiritual support, Know Your Rights information, access to legal consultations, and to accompaniment so that they can have some degree of agency, self-advocacy, and support as they go through the immigrant detention and deportation system.

Alongside our detention-related work, we promote and participate in many different forms of interfaith activism for humane immigration policies and systems. Working with many partners, we organize  interfaith prayer vigils several times each month at our federal building in Manchester, New Hampshire when immigrants have check-in appointments with ICE. The vigils include the Jericho walk, which is a silent solidarity march to raise awareness of the harm done to the people who experience our unjust immigration system.

Regularly, we are 50 to 100 faith leaders and others, visiting with families as they enter for their appointments and waiting for them to return with the outcome, which is often another date for yet another check-in, sometimes only a month away. At our state legislature, we join with these partners to advocate for pro-immigrant policies, and against anti-immigrant policies, and we make our views known to our New Hampshire congressional delegation as well. We also work at the municipal level, trying to get local police to understand their role as separate from immigration enforcement, urging them to listen to immigrant communities about what they need to be safe.

We’re part of the sanctuary network here in New Hampshire as well. Dover Friends Meeting is a sanctuary congregation, and I facilitate a coalition of Seacoast-area faith communities that support sanctuary at the meeting house. There are two other sanctuary congregations in the state, in Manchester and in the Upper Valley. We had a family living in our meeting house for five weeks from mid-November till the end of December, who, because of some legal actions they were able to take with an attorney, now have a reprieve from detention so they’ve been able to move back home. They never needed to go public with their sanctuary because they identified an option for themselves.

As part of the AFSC NH Program, we are always inviting and supporting faith leaders and other folks into the work, so that together we can build our power and put more pressure on our elected officials to create more humane policies. We try to keep immigrants out of detention, get people out of detention, and build a narrative that calls for shutting those systems down. 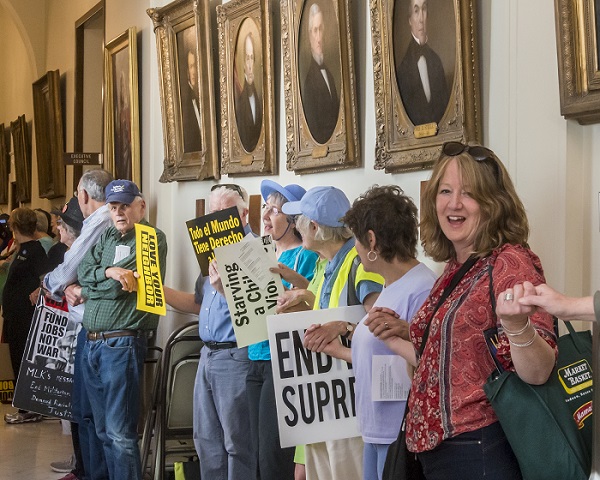 Sophia: What does being a Quaker mean to you?

Maggie: I have been attending Quaker meeting for nearly 12 years, since my husband and I and our two children returned to the U.S. from Bolivia where we were serving in a Catholic mission organization called Maryknoll for four years. Our return to the U.S. required us to figure out how we were going to live again in the United States in a meaningful way, so that we could be true to all that we had learned from the Bolivian people with whom we had lived. We began by looking for a new faith community.

We had been inspired by the spirit and history of the Maryknoll community in the US and Latin America, but we had a lot of disappointment and anger at what we saw as a lack of moral leadership and prophetic courage in the larger, institutional Catholic Church and especially the hierarchy. When we started attending our local Dover Quaker Meeting, it immediately became a place for us of renewal and of peace. At meeting for worship, I could feel myself being healed and restored, and quieted for a deeper listening.  After nine years of being regular attenders of Dover Friends Meeting, our family became members together about three years ago.

I began working for AFSC at the same time that I was getting to know the Dover Quakers, so suddenly I was immersed in Quakerism in both my personal/spiritual life and my work life. I was so happy to have found this path—a nurturing faith community and real work for justice and peace in my own local community. Because my spiritual journey as a Quaker began simultaneously with my labor as an activist in a Quaker-founded organization, it’s hard for me to talk about my Quaker faith without talking about my Quaker-rooted action; it’s all intertwined and it’s mutually reinforcing. In Quaker worship, I step outside of the action and the incessant demands of this work to be attentive to the Spirit, to listen deeply and to try to understand what we are being called to as a community, and it helps me to discern what might my place in that work might be.

I get freed in Quaker worship from an “I”-driven story. Often in my work life, I think about what’s my contribution to this particular project or campaign, what’s the missing piece that I need to pick up, or what did I say I would do --  there’s a lot of “I” in that. Being in meeting for worship I remember that my offering is only a part of it all;  it is in community that we seek the truth and our path forward. I’m freed to look at things more holistically, with a little more distance and appreciation for the fact that we are always only ever a small part of what is going on and what needs to be done.

Read part 2 of this interview with Maggie here.