Protesters demand democracy for all in Israel

Sahar, the author, getting shot by a water cannon at a protest on July 14th AFSC

July 14th is the Bastille day–the day in which the Bastille fell, and that has come to symbolize the French revolution. This year, on this highly symbolic day, a steady, years old anti-corruption movement in Israel morphed itself into something else completely. By the end of that night, more than 50 protesters –including myself–were led to a police station soaking wet after hours of water cannons trying to disperse the hundreds of protesters blocking roads all around Jerusalem.

The background to these protests are a combination of a prime minister who has been indicted and currently stands on trial on multiple charges of corruption, an “emergency coalition government” formed to respond to the COVID crisis after three elections in which Israeli politics were at a complete deadlock, a complete failure of the government to address the spread of the "second wave" of COVID in the country, and the failed economic response to COVID giving symbolic blanket payouts on the one hand while failing to actually address the needs of those who lost their jobs and incomes.

For years, groups have been protesting Prime Minister Benjamin Netanyahu’s corruption on a weekly basis–protests that grew in the past few months, but only on July 14 did these protests really pick up. A few days after the arrest of one of the traditional protest leaders, hundreds of young people finally joined the protest, and their demands were far beyond rooting out corruption. Spontaneously, the caged-in protest outside the residency of the prime minister turned into a march throughout the main streets of city center Jerusalem. When the protest was met with water cannons and mounted police, it just kept going back and forth through the streets of the city, until hours later, in a major junction back by the prime minister’s house, wet, beaten up and energized, the last of the protesters were either arrested or dispersed. Since then, three times a week, thousands gather in that junction, redefining what the protest is about with every sign and chant with one thing clear–a demand to change the current regime.

I wish I could continue this historical comparison and speak of a revolution with freedom, equality, and fraternity as its foundations happening in Israel now. We are still far from it. However, the growing protest movement against the current Israeli administration, does bring with it some refreshing and new energy. And radical content. 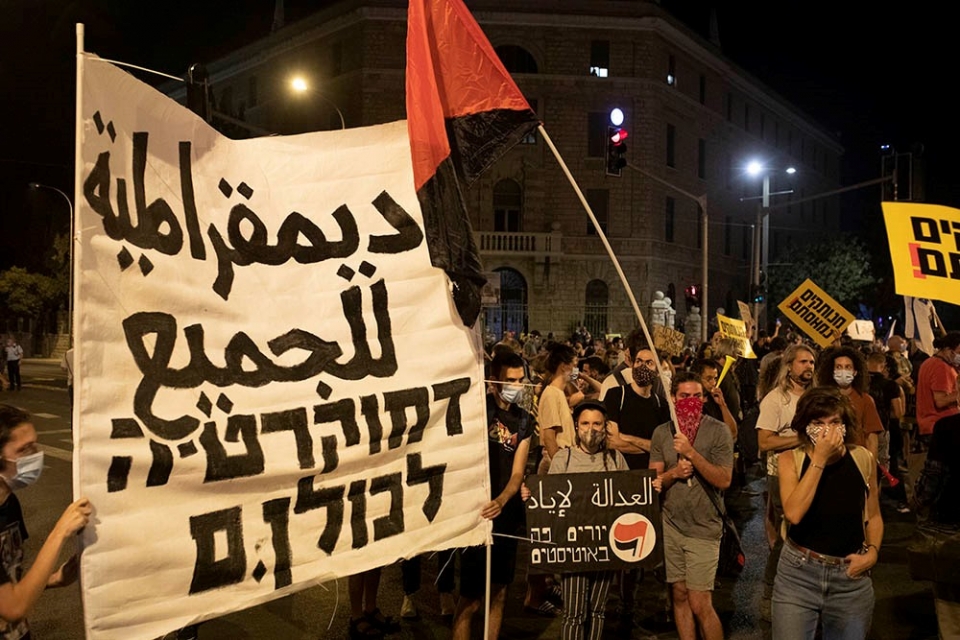 An anti-occupation block formed in these protests naturally and has been growing from week to week. In recent years, any opposition to the Israeli occupation and military control over Palestinians, has been completely de-legitimized in mainstream Israeli discourse, and the initial expectation was that in these protests, like in other more mass protests, these messages will be ignored at best, if not attacked. So many Israelis have abandoned the struggle against the occupation from a feeling of hopelessness, and would usually claim that adding these basic human rights demands to a mass protest will alienate people. But in these protests the opposite is true.

Like everything in these protests it is ever changing, dynamic, and hard to define, but what is clear is that so many of the young protesters are making the connection between police racism and violence, to the occupation, to climate justice and the corruption of the prime minister.  “Justice for Iyad”, a Palestinian man shot to death by Israeli police on June 30th, has become one of the most common chants in these protests, alongside “democracy for all” –clearly referring to those under Israeli control that do not get to participate in its so called democracy–Palestinians. A new group has emerged under that title – Democracy for all - trying to bring this new energy into the ongoing struggles for a radical change in the country, and the “Democracy for all” signs are growing while the number of Israeli flags is diminishing from protest to protest.

It is important to remember that again, this is not (yet?) a revolutionary movement. If the country goes to another round of elections soon, Netanyahu is likely to be re-elected as he still enjoys vast support, but more importantly there is still no alternative to him in the Israeli political landscape. On top of that, the vast majority of the protestors are still not ready to recognize the intersections of the corrupt government and neo-capitalist agenda with the occupation and racism of the state. But something is changing. The left is stating its demands again, and for that to be accepted and maybe, even agreed with. It’s a pretty simple demand to agree with, and yet it is radical–a democracy for all.